The Books of the Wode

History & legends chronicle Robin Hood & Guy of Gisbourne as the deadliest of enemies. The reality is... complicated.

With a truly original take on the Robin Hood legends, this historical fantasy series sets Robin the outlaw archer as a queer, chaotic-neutral druid; Marion as pagan queen who is sister but not wife, and their consort a Christian -- and thusly conflicted -- nobleman. 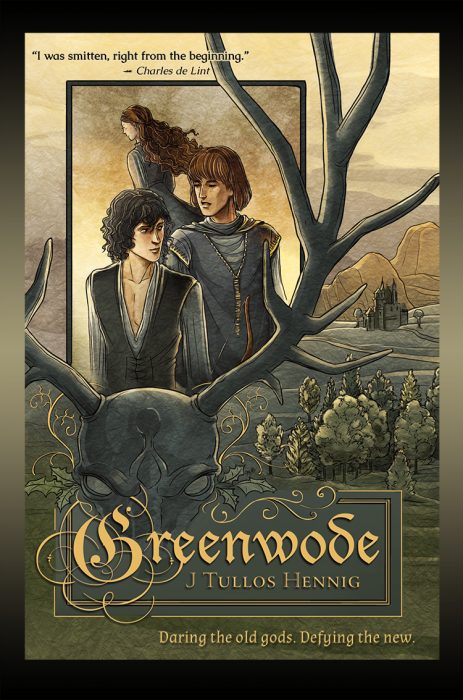 Prequel (Book One) of the Wode

Daring the Old gods. Defying the New.
The making of a legend—and a truly innovative re-imagining of Robin Hood.
____
Rob of Loxley and his elder sister Marion have been groomed from birth to take their parents’ places within the Old Religion. Despite this, when Rob finds an injured nobleman’s son in the forest, neither he nor Marion understand what befriending young Gamelyn could mean for the future of their beliefs. Already the ancient spirits are fading beneath the iron of noblemen’s politics and the stones of Church subjugation. More, the druid elders warn that Rob and Gamelyn are cast as sworn adversaries, locked in timeless and symbolic struggle for the greenwood’s Maiden.

Instead, in a theological twist only a stroppy dissident could envision, Rob swears he’ll defend the sacred woodland of the Horned God and Lady Huntress to his last breath—if his god will let him be lover, not rival, to the one fated as his enemy.

But in the eyes of Gamelyn’s Church, sodomy is unthinkable... and the old pagan magics are an evil that must be vanquished.

Book 2 of the Wode

Legends chronicle Robin Hood and Guy of Gisbourne as the deadliest of enemies.
The reality is… complicated.
_____
Home razed by Church edict, loved ones struck down by treachery, Rob is left for dead. Taken by the old druid master into the deeps, he emerges with a new name and purpose: leader of a band of tight-knit outcasts, who claim the ancient forest and wield the Horned God’s vengeance with silent, deadly arrows. Gamelyn, disowned by his noble family, has also fled the wake of Loxley’s destruction. Returning to England from several years on Crusade, he too has found a new identity and purpose—but no absolution.

When the two boyhood lovers next cross paths, it is in a brutal, blindfolded game of foxes and hounds, one pitting Templar assassin against Heathen outlaw. And as Robyn discovers his sister Marion is still alive, the game turns.

Thwarted kings of a broken realm, Robyn Hode and Guy de Gisbourne must restore the Maiden to her rightful place—and manage to not destroy each other in the process. 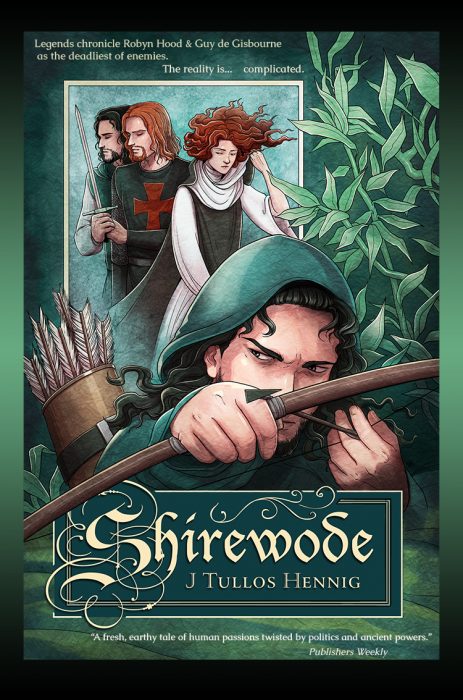 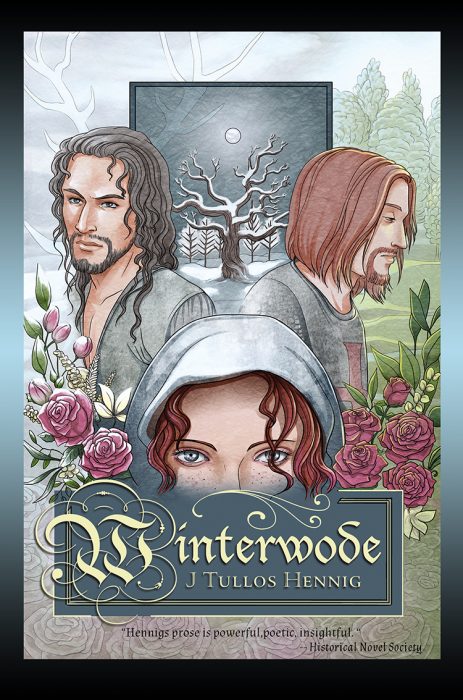 Beneath winter's chill is awakening the deepest of magics... and the struggle for a crown.

Robyn Hood is the undisputed ruler of the wild, green Wode. Reunited with his sister Marion and his lover Gamelyn in Sherwood Forest, Robyn and his band of outlaws seek to raise the Ceugant—the magical trine of the Old Religion—against the tyranny of Church and Crown. Yet their forest kingdom is roiling with conflict. Marion has been made welcome, but old shackles and new fears hamper her true promise. Gamelyn is torn between oaths of heart and head—and the outlaws never let him forget he was but recently Guy of Gisbourne, defrocked Templar and Robyn's fiercest enemy.

When a lone traveller is waylaid on the road, a common occurrence quickly proves uncommon. Knight and Maiden, Archer and Men, all are conscripted to aid a Queen's—and ultimately a King's—ransom. For beneath winter's chill is awakening the deepest of magics, and there are those who seek the power of Robyn Hood and his Shire Wode for their own ends. . .

The Summer King has come to the Wode... yet to which oath, head or heart, shall he hold?

Once known as the Templar assassin Guy de Gisbourne, dispossessed noble Gamelyn Boundys has come to Sherwood Forest with conflicted oaths. One is of duty: demanding he tame the forest’s druidic secrets and bring them back to his Templar Masters. The other oath is of heat and heart: given to the outlaw Robyn Hood, avatar of the Horned Lord, and the Maiden Marion, embodiment of the Lady Huntress. The three of them—Summerlord, Winter King, and Maiden of the Spring—are bound by yet another promise, that of fate: to wield the covenant of the Shire Wode and the power of the Ceugant, the magical trine of all worlds. In this last, also, is Gamelyn conflicted; spectres of sacrifice and death haunt him.

Uneasy oaths begin a collision course when not only Gamelyn, but Robyn and Marion are summoned to the siege of Nottingham by the Queen. Her promise is that Gamelyn will regain his family’s honour of Tickhill, and the outlaws of the Shire Wode will have a royal pardon.

But King Richard has returned to England, and the price of his mercy might well be more than any of them can afford... 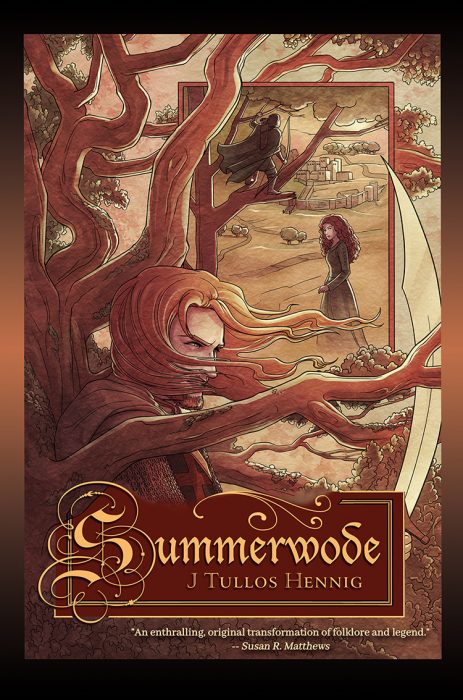 The Books of the Wode bring a truly unique and fresh perspective to a rich legacy of myth, magic and ancient ballads. Robin Hood lives, in a Britain caught in ideological struggle between Christianity and Paganism.

Reviews for The Wode ~~~

"Hennig’s Wode series continues to reinvent the legend of Robin Hood. . . Thick with conflict and intrigue, this retelling turns a well-known legend into a fresh, earthy tale of human passions twisted by politics and ancient powers."

"In a reinventing of the lore, author J Tullos Hennig has taken her passion for history and mythology and created a new fantasy world in the Books of the Wode... retelling the familiar tale of Robin Hood with just enough twists and turns to give the age-old legend a fresh new perspective... Depending on your stance on folklore, Greenwode, Shirewode, and Winterwode can all fit comfortably under the genre umbrellas of Fantasy, Romance, Historical Fiction, and even Alternate History. Given the author’s innate ability to take classic lore and make it new again through works of fantasy, fans of other genres or literature in general are sure to enjoy these works..."

"The prose is poetic, powerful, insightful. Hennig has a masterful command of weaponry and battle-speak, as well of wode magic."

"The angst-filled, but amazing finale of a splendid Robin Hood reboot. . . Possibly Hennig's most important and interesting contribution to the Robin Hood literature is the carefully crafted and beautifully written analysis of the religious context in which this 12th-century story unfolds. Ultimately Rob and Gamelyn's story is one of class and ethnicity and religious belief. For me, the fact that the core story is about two men struggling to love each other was the reason I bothered to buy the book. But the fact that Hennig has taken that core premise and woven a magical literary tapestry around it is what made it worth reading."

Lias at THE NOVEL APPROACH

"Epic is such an overused word, but that’s what this series is. J Tullos Hennig’s storytelling is dense with imagery and lush with the obvious love of the legends around which her artistry pays perfect compliment. . . There are some books that become unforgettable, characters who become beloved, books that make a mark and leave an impression behind, and Shirewode is one of those books."

"An intensely emotional, breathtaking version of the Robin Hood legend... beautifully showcases the cultural and religious upheaval between peasant versus nobility, oppressed versus oppressors..."

A gutsy twist on a major classic that works!"